From toddlers to seniors, from passive to active park- and beach-goers, and for people of all ability levels: promoting enjoyable, safe and accessible recreational facilities and activities has been the unwavering aim of the Friends of the Powerhouse’s efforts from its inception through today.

The formation of the Friends of the Powerhouse ensued from a small but dedicated group’s proactive transformation of the historic but rundown Del Mar powerhouse into a beautiful, multi-purpose center the entire community could take pride in and enjoy. From that first venture in the late 1990s, the FOP’s scope has grown immensely in magnitude and money raised.

Today, the FOP serves as an adjunct to the City of Del Mar in providing funds as well as construction design and oversight for diverse projects that enhance Del Mar’s exceptional quality of life throughout the beach area. To continue its momentum of Preservation, Restoration and Recreation, the organization raises project funds by offering customized Bricks, Planks and Naming Rights and presenting fun events.

Next on the Beach…. a New Powerhouse Viewing Deck 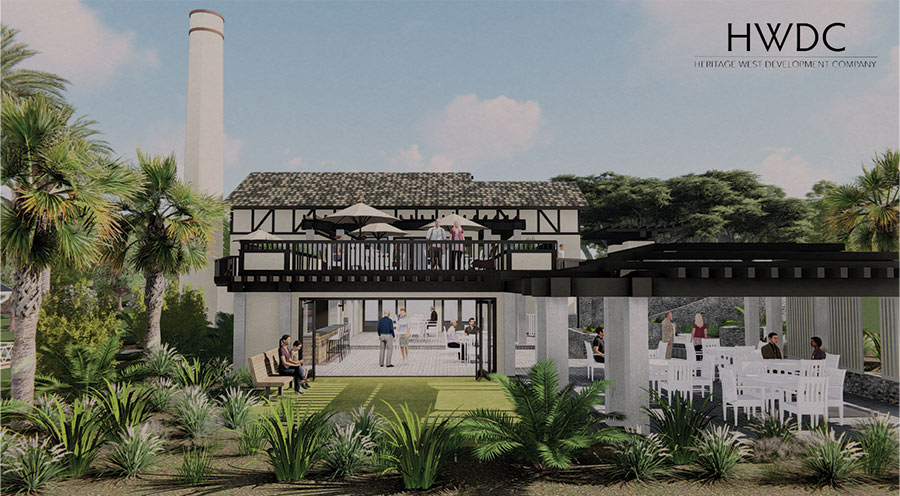 Working with Del Mar architect Howard Gad, the FOP has proposed an expanded deck for the Powerhouse. The plan is to extend the current balcony area to create a large second story deck. The Friends of the Powerhouse and the City of Del Mar are working together on this project.

The Del Mar City Council has indicated its support for the expansion and have budgeted the necessary study and construction plans. The Friends of the Powerhouse have offered to work in partnership with the city by providing major funding for the addition to the building.

The new addition will provide a place where people can go to relax, come together, meet friends, and enjoy the sights and sounds of the beach below. The plan is to create an open viewing patio off the current second story porch. It is expected that the work can be completed by the end of 2018.

It is conceivable that in the future, either the downstairs patio or the upstairs deck could be enclosed. This is not a part of the current expansion proposed for 2018. 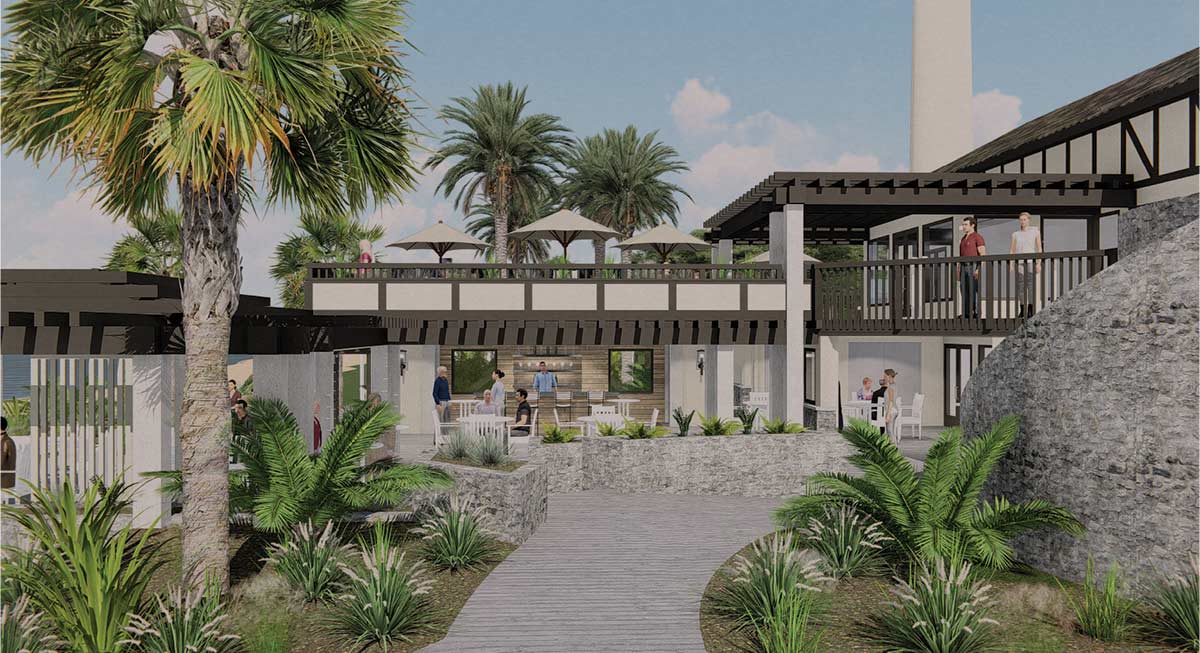 Friends of the Powerhouse Founding President Barbara Harper at the opening of the new Powerhouse Community Center.

The energy and commitment of what was then called the Powerhouse Restoration Committee were emblematic of successful efforts to come. The Committee, which as it grew over the years would include various City Council members, was spearheaded by longtime Del Mar resident Barbara Harper,  founding President . A consensus builder, Barbara gathered together disparate members of the community who united behind the effort to enhance Del Mar’s exceptional quality of life.

In just two years, the group raised sufficient funds to support the detailed restoration of the old powerhouse into the Powerhouse Community Center at 1658 Coast Boulevard. Many people came together to celebrate a Grand Opening on December 4, 1999.

Since then, the FOP has raised funds to support what quickly became recognized as a civic treasure. Continued FOP monetary support has ensured upkeep of the Powerhouse Community Center and surrounding public areas. Maintenance and enhancements have helped attract increased City facility rentals for a multitude of uses, including senior activities, weddings and other special events, gatherings and more. Rental proceeds go to City coffers.

Buoyed by its success with the Powerhouse Restoration, the FOP next tackled the Lifeguard Headquarters and grim eyesore of a drainage ditch that deterred easy access to the beach. Thanks to the FOP’s efforts and generosity of contributors, the FOP raised one-third of the total cost required to construct the Beach Safety Center/Lifeguard Tower project, which included turning the ditch into a beckoning boardwalk that provides safe beach access from the street.

In 1964, Del Mar Chief Lifeguard Gardner Stevens built the City’s first lifeguard tower at the 17th Street beach with his own hands and the help of his friend, Del Mar Fire Chief Jim Baker. By 2008, with both the department and number of beach visitors having grown over the past 44 years, the structure was in a dangerous state of disrepair. Obviously, the facility needed some help from its friends: the Friends of the Powerhouse!

Eager to maintain the Lifeguard Service’s admirable safety record, the FOP initiated a series of fundraisers, including an annual Valentine Dance and a “Power to the Tower” summer event. In addition, the group aggressively sought grants and donations, selling hand-painted tiles as well as initiating ongoing contribution opportunities: personalized bricks and planks for the boardwalk and naming rights within the building.

On June 27, 2012, four years after the campaign began, the Beach Safety Center/Lifeguard Tower celebrated its Grand Opening. The efforts of the Friends of the Powerhouse and the City of Del Mar earned an award.

Next to the Center the FOP created a History Wall and the BilTeague Memorial Garden. An unsafe and unsightly drainage Trench was replaced by a boardwalk to enhance the beauty of the new, safe pedestrian entrance to the beach.

Over time, the FOP has contributed several lifeguard rescue boats, beach wheel chairs for disabled beachgoers, and lifeguard safety equipment. FOP has also provided bike racks, outside sinks and other items needed for the Center to better serve the residents of Del Mar and surrounding communities. 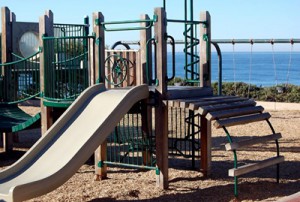 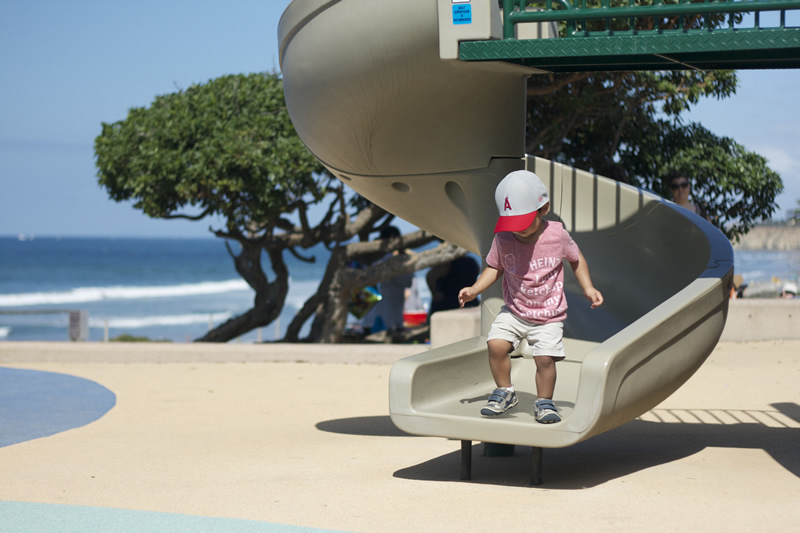 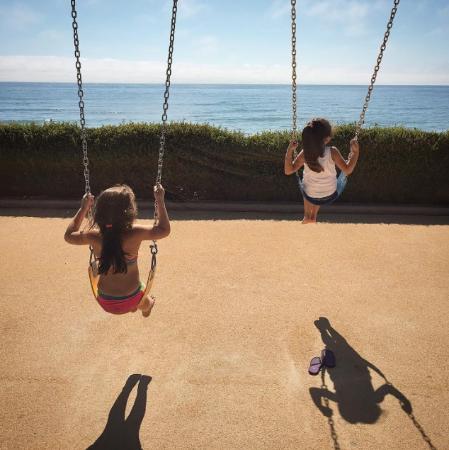 Nestled within scenic Powerhouse Community Park, the Tot Lot is a barefoot- and kid-friendly “park within a park” boasting swings, slides and climbing equipment. Thanks to FOP’s commitment and contributions, the upgraded Tot Lot is a vast improvement over the original venue built in the 1990s.