To preserve historical and architecturally significant properties, promote social welfare, educate the public and protect the community and its landmarks in the beach area of Del Mar, California.

To fulfill this Mission, the Friends of the Powerhouse raises funds to assist the City of Del Mar with ongoing preservation and enhancement of the Powerhouse Community Center, Beach Safety Center/Lifeguard Tower and adjoining public recreational areas.

About Friends of the Powerhouse 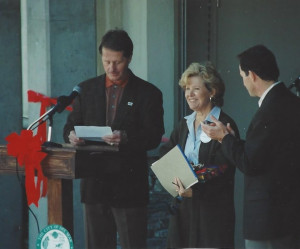 Friends of the Powerhouse Founding President Barbara Harper at the opening of the new Powerhouse Community Center.

The Friends of the Powerhouse (FOP) is a 501(c)(3) nonprofit public benefit organization formed in 2001 by a small, dedicated group of primarily longtime Del Mar residents with a passion for their community. Many founding members continue to be active on the Board.

Beginning with a strong commitment that has never wavered, the FOP has grown substantially in membership, scope, projects, programs, fundraising and its value to the community. Since its inception, it has raised more than $3 million for diverse projects in the beach area.

The impetus for FOP began with the City of Del Mar’s late 1980s construction of Powerhouse Park, located on the 1600 block of Coast Boulevard, between the ocean and railroad tracks. Once Phase One – the Park – was completed, interest arose in renovating the neglected powerhouse on the property so it could function as a public community center. This became the City project’s Phase Two and a major priority for a supportive new organization.

Painting tiles for the bathroom area.

Through these and other fundraising activities, the Committee raised a substantial amount of money for the restoration, which included saving the iconic smokestack and adding new public park restroom facilities. Proceeds also benefited construction projects at Powerhouse Park and its Tot Lot.

Powerhouse Restoration Committee Evolves into Friends of the Powerhouse

This auspicious beginning helped attract new members and monetary contributions. Within a few years, as its scope broadened, the Powerhouse Restoration Committee became a registered nonprofit named Friends of the Powerhouse (FOP).

In 2014, after supporting the City’s Lifeguard service for many years, the FOP was asked to incorporate the nonprofit Del Mar Lifeguard Association into Friends of the Powerhouse. The FOP Board believes this natural fit bolsters our value to the community. 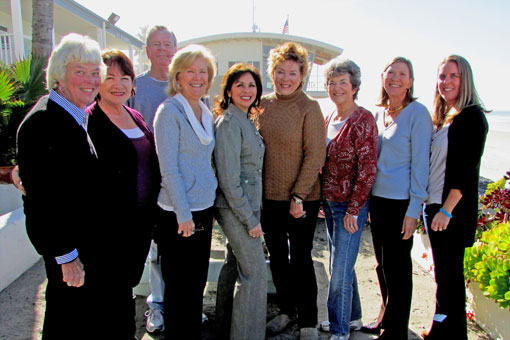 Board meetings are typically held at 9 am on the third Wednesday of the month at Jake’s Del Mar, 1660 Coast Boulevard, Del Mar, CA 92014. Over the years, Jake’s has been a consistent, strong, FOP supporter. If you are interested in attending, please click here.
MENU